Hello and thank you for reading my blog. I'm Gill and live with my husband in rural Northumberland. We moved here from North Tyneside in October 2004 and couldn't go back to city living ever again...too many people, too much noise and mess and too much, well, everything that I cannot stand! I much prefer a quieter and slower pace of life.

I've been a keen gardener since I could barely walk and would follow my dad around our back garden and help him with sowing seeds, watering and pruning etc. Even after I left home I still retained this interest and grew as much as possible in whatever space I had available...even if that was just a kitchen windowsill or a tiny balcony. During these years I developed an interest in houseplants and soon had my own indoor jungle!

In February 2015 I was lucky enough to be able to rent an allotment just a few minutes' walk from home. At first I only intended to use it to grow flowers as that was all I had ever known since childhood but then, as it had a 30ft polytunnel I decided to have a bash at tomatoes....which soon became cucumbers, peas, French beans, beetroot, lettuce, radish and potatoes.  I'll freely admit that the first day I was up on the plot by myself I just felt terrified!!!  Where the hell did I even begin???  The allotment is classed as a half plot and is 90ft x 35ft which, in those early days, felt so big and an impossible to fill space....but once I started creating proper beds and planting potatoes etc and building wigwams things soon filled up.

I also still had lots of flowers too and it was wonderful to see these buzzing with life as the pollinators and butterflies returned to Plot 34. The previous tenant had a typical old-school attitude in that anything that wasn't a leek, potato, cabbage or turnip was to be removed/poisoned or sprayed to within an inch of it's life!  It truly was a desert when I took it over but now, just six years later, it is full of life.

The past two years have seen it get a bit TOO overgrown however as life got in the way but now things are beginning to pick up once more and with it my renewed interest (obsession even!) with growing as much fruit, vegetables and flowers as my plot can take!  Hopefully at some point I would love to have some chickens too!  That may be a plan for 2022 however as I think this year will be mostly be focusing on reclaiming my allotment from the disaster zone it has become and turning it back into the fully organic kitchen garden I can see it as in my head!

This blog is a record of this...as well as days out visiting other gardens and exploring the wildlife and nature to be found in the beautiful countryside around us - hopefully it won't be too boring for you all!

Happier days before it became a messy disaster zone! 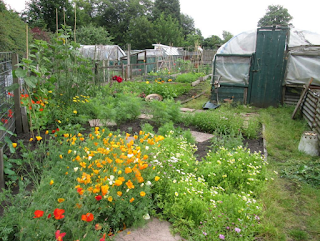 Alnwick, Northumberland
Born in 1968 in Wallsend, North Tyneside I've always been obsessed with gardening and animals. I moved up to rural Northumberland in October 2004 with husband Neil and I now live in the market town of Alnwick.